On the 28th of June the event Containers Today was held in the Fokker Terminal in The Hague. This event was organized by Amazic and Lef Marketing. KPN ICT Consulting was one of the sponsors of this event, next to Docker, Amazic etc. A booth and a session were part of the sponsor package.

It was very nice weather and as a result of that sometimes a bit hot inside the building. The event was visited by around the 330 people and had a variety of sessions divided in three different tracks, Business, Operations and Developer. The event started with a keynote session by Bradley Wong, Director of Product Management within Docker. As part of Bradley's presentation were some slides with numbers of Docker downloads, Docker Hub usage and also the number of job listings which included Docker knowledge as a requirement.

After the keynote there was the first breakout session. I attended  the session Dockerizing the Enterprise, Fast and Secure. This session was presented by Jean-Paul van Deursen and Wiebe de Roos from ABN AMRO. They showed diagrams of how their CI/CD environment was built and which components were used. They also spoke about the steps they had to take to get to the current situation and what there next steps were. The second breakout session started after the first coffee break. The session in the Operations track was hosted by KPN ICT Consulting. I was one of the presenters together with my colleagues Patrick Mandemaker and Mimo Amghar. The title of our session was The Good, The Bad and The Containers. A lot of people showed up for our session and the room was more than filled. Patrick started the session with some slides about KPN ICT Consulting. After that Mimo took over and told  about the history and evolution of containers and what the benefits are of containers for customers of KPN. I finished the presentation by explaining what steps we took in building the platform within our hosting environment and what hurdles had to be taken. There were a lot of good questions and feedback from the audience.

After the session was the lunch break. During the lunch break I spoke with some of the attendees regarding our sessions and also the possibilities and opportunities KPN ICT Consulting and KPN had to offer. I skipped the afternoon tracks and took my time to network with the vendors which were also on the expo floor, manned our booth and also spoke with other attendees. 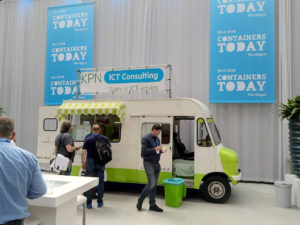 The last session of the day was again presented by Bradley Wong and he gave a recap of the announcements on DockerCon 2018 which took place from the 12th till the 15th of June in San Francisco.  He also gave an outlook on the direction in which Docker is going. The day ended with a reception and a raffle hosted by Docker and Amazic. For me, and I guess for everybody attending it was very good event. Met a lot of interesting people, had some good talks. Looking forward to next year.