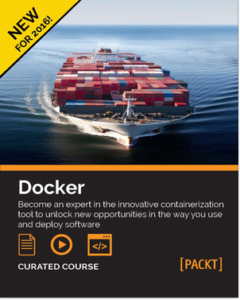 So hot off the presses, the latest buzz that has been on the tip of everyone's tongues and the topic of almost any conversation that includes containers these days is Docker! Docker has been a game-changer when it comes to virtualization. With this course, you will go from just being the person in the office who hears that buzz to the one who is tooting it around every day. This course will be a smooth journey covering Docker from scratch to finish! By sequentially working through each steps in this course, you will quickly master Docker and be ready to ship your applications without needing to spend sleepless nights for deployment. Beginning with the Learning Docker module, get yourself familiarized with the fundamentals of Docker. This module would be a step-by-step guide that will walk you through the various features of Docker from Docker software installation to knowing Docker in detail. The aim is to make you fluent with Docker basics. You’ll then dive a little deeper into Docker. The second module, Networking Docker, will show you how to create, deploy, and manage a virtual network for connecting containers spanning single or multiple hosts. In the third module, Monitoring Docker, you will get to grips with monitoring your Docker apps and containers - this will show you how monitoring containers and keeping a keen eye on the working of applications helps improve the overall performance of the applications that run on Docker. With the rising integration and adoption of Docker containers, there is a growing need to ensure their security. The purpose of our fourth module, Securing Docker, is to provide techniques and enhance your skills to secure Docker containers easily and efficiently. Now that you've learned the nitty-gritty of Docker, it's time to take a step ahead and learn some advanced topics. The final module, Mastering Docker, will help you deploy Docker in production. You will also learn three interesting GUI applications: Shipyard, Panamax, and Tutum.

1: GETTING STARTED WITH DOCKER

4: WORKING WITH DOCKER CONTAINERS AND IMAGES

7: RUNNING SERVICES IN A CONTAINER

17: NETWORKING IN A DOCKER CLUSTER

22: A TRADITIONAL APPROACH TO MONITORING CONTAINERS

25: COLLECTING APPLICATION LOGS FROM WITHIN THE CONTAINER

What You Will Learn

Pethuru Raj, PhD, works as a cloud architect at the IBM Global Cloud Center of Excellence (CoE) in Bangalore, India. He completed his CSIR-sponsored PhD degree at Anna University, Chennai, and continued his UGC-sponsored postdoctoral research at the Department of Computer Science and Automation of IISc, Bangalore. Thereafter, he was granted a couple of international research fellowships (JSPS and JST) to work as a research scientist for 3 years at two leading Japanese universities. Pethuru has contributed to a number of high-quality technology books that are edited by internationally acclaimed professionals. In association with another IBMer, he has recently submitted the complete manuscript for a book called Smart Cities: the Enabling Technologies and Tools, to be published by the CRC Press in the USA in May 2015. He has collaborated with a few established authors to publish a book called High-Performance Big Data Analytics, which will be published by Springer-Verlag, UK, in 2015. He maintains an IT portal athttps://www.peterindia.net, and his LinkedIn profile can be found athttps://www.linkedin.com/in/peterindia.

Jeeva S. Chelladhurai has been working as a technical project manager at the IBM Global Cloud Center of Excellence (CoE) in India for the last 8 years. He has more than 18 years of experience in the IT industry. In various capacities, he has technically managed and mentored diverse teams across the globe in envisaging and building pioneering telecommunication products. He specializes in cloud solution delivery, with a focus on data center optimization, software-defined environments (SDEs), and distributed application development, deployment, and delivery using the newest Docker technology. Jeeva is also a strong proponent of Agile methodologies, DevOps, and IT automation. He holds a master's degree in computer science from Manonmaniam Sundaranar University and a graduation certificate in project management from Boston University. He has been instrumental in crafting reusable assets for IBM solution architects and consultants in Docker-inspired containerization technology.

Vinod Singh is a lead architect for IBM's cloud computing offerings. He has more than 18 years of experience in the cloud computing, networking, and data communication domains. Currently, he works for IBM's cloud application services and partner marketplace offerings. Vinod has worked on architecting, deploying, and running IBM's PaaS offering (BlueMix) on the SoftLayer infrastructure cloud. He also provides consultancy and advisory services to clients across the globe on the adoption of cloud technologies. He is currently focusing on various applications and services on the IBM Marketplace/BlueMix/SoftLayer platform. He is a graduate engineer from the National Institute of Technology, Jaipur, and completed his master's degree at BITS, Pilani.

Shrikrishna Holla is a full-stack developer based in Bangalore and Chennai, India. He loves biking, listening to music, and occasionally, sketching. You can find him frequently in hackathons, wearing a hoodie and sipping Red Bull, preparing for an all-nighter. He currently works as a product developer for Freshdesk, a cloud-based customer support platform. You can get in touch with him on Twitter (@srikrishnaholla) or find him at the Docker IRC channel (#docker on Freenode) with the shrikrishna handle.

Oskar Hane is a full stack developer, with 15 years of experience in the development and deployment of web applications. During this period, he mostly worked with start-ups and small, fast-moving companies. He is the cofounder of several companies and has been working as an independent contractor for the past few years. These days, Oskar works with Neo4j, the world's leading graph database, where he spends most of his time on the frontend, writing JavaScript. He lives in Sweden with his wife and daughter. He enjoys programming as well as all kinds of sports and outdoor activities, such as hunting and fishing.

Neependra Khare is currently working as a principal performance engineer in Red Hat's system design and engineering team. He has more than 11 years of IT experience. Earlier, he worked as a system administrator, support engineer, and filesystem developer. He loves teaching. He has conducted a few corporate training sessions and taught full semester courses. He is also a co-organizer of the Docker Meetup Group, in Bangalore, India. He lives with his wife and two-year-old daughter in Bangalore, India. His Twitter handle is @neependra and his personal website is https://neependra.net/. He has also created a website for the book, which you can visit at https://dockercookbook.github.io/.

Rajdeep Dua has over 16 years of experience in the Cloud and Big Data space. He worked in the advocacy team for Google's Big Data tools, BigQuery. He worked on the Greenplum big data platform at VMware in the developer evangelist team. He worked closely with a team on porting Spark to run on VMware's public and private cloud as a feature set. He has taught Spark and Big Data at some of the most prestigious tech schools in India. Currently, he leads Developer Relations team at Salesforce India. He also works with the Data Pipeline team at Salesforce, which uses Hadoop and Spark to expose big data processing tools for developers. He has published Big Data and Spark tutorials at https://www.clouddatalab.com. His LinkedIn profile is https://www.linkedin.com/in/rajdeepd. He has also presented BigQuery and Google App Engine at W3C conference in Hyderabad (https://wwwconference.org/proceedings/www2011/schedule/www2011_Program.pdf). He led Developer Relations teams at Google, VMware, and Microsoft. He has spoken at hundreds of other conferences on the cloud. Some of the other references of his work can be seen at https://yourstory.com/2012/06/vmware-hires-rajdeep-dua-to-lead-the-developer-relations-in-india/ and https://dl.acm.org/citation.cfm?id=2624641. His contributions to the open source community are related to Docker, Kubernetes, Android, OpenStack, and cloudfoundry. He has teaching experience in big data at IIIT Hyderabad, ISB, IIIT Delhi, and College of Engineering Pune.

Vaibhav Kohli has around 3 years of working experience in the research and development department of VMware, and he has been teaching computer engineering for a year at the esteemed Mumbai University. He has published many research papers and filed three patents from VMware in the container domain. He has also conducted workshops in various companies and meetups on container technology (Docker) and Kubernetes.

Santosh Kumar Konduri has around 5 years of IT experience. He is an expert OpenStack administrator with 3 years of experience.

Russ McKendrick is an experienced solution architect who has been working in IT and related industries for the better part of 23 years. During his career, he has had varied responsibilities in a number of industries, ranging from looking after an entire IT infrastructure to providing first-line, second-line, and senior support in client-facing and internal teams for corporate organizations. Russ works almost exclusively with Linux, using open source systems and tools across dedicated hardware, virtual machines to public and private clouds at Node4 Limited, where he heads up the Open Source solutions team.

Allan Espinosa is a DevOps practitioner living in Tokyo. He is an active open source contributor to various distributed systems tools, such as Docker and Chef. Allan maintains several Docker images for popular open source software that were popular even before their official release from the upstream open source groups. In his career, Allan has worked on large distributed systems containing hundreds to thousands of servers in production. He has built scalable applications on various platforms ranging from large supercomputing centers in the U.S. to production enterprise systems in Japan. Allan can be contacted through his Twitter handle @AllanEspinosa. His personal website at https://aespinosa.github.io contains several blog posts on Docker and distributed systems in general.

Scott Gallagher has been fascinated with technology since he was in elementary school, when he used to play Oregon Trail. His love continued through middle school, working on more Apple IIe computers. In high school, he learned how to build computers and program in BASIC!. His college years were all about server technologies such as Novell, Microsoft, and Red Hat. After college, he continued to work on Novell, all while keeping an interest in technologies. He then moved on to managing Microsoft environments and eventually into what he is the most passionate about: Linux environments. Now, his focus is on Docker and cloud environments.