This year was again a UserCON organized by the dutch VMware User Group Community. Just like the year before it took place in Den Bosch in the convention center 1931. Last year the NL-VMUG was the largest in the world. This year there were even more attendants then last year that came to the UserCON. A good result for the people organizing the UserCON. Like every year the organization created an event with a good mix of sessions, sponsor exhibition and of course good food and drinks. The first keynote session was by Kit Colbert, VP & CTO, Cloud-Native Apps – VMware. Kit talked about the transformations which are happening within companies. The changing demands from the business also effects the way the it department provides services. The need for working in an agile way, adopting devops and the implementation of containers and microservices. While devops is basically not a technical change but a different way of working, the use of products like Docker and Kubernetes is. Kit explained how VMware is responding on these changes by offering products. - vSphere Integrated Containers (VIC) With vSphere Integrated Containers you provide the Docker api to the developers, so that they don't notice the difference in functionality and can spin up Docker images. Each time you spin up a Docker image, a virtual machine is cloned from memory. As a result every container runs in a virtual machine. The difference between the old way where you have a Linux machine with Docker engine installed and 1 or more containers in one virtual machine, you have now one container per virtual machine which is running on top of Photon OS. Photon OS is a Linux distribution which has been tweaked for running containers. By using VIC you can now see the performance and behavior of the different container from with the vCenter client. Also functionality like DRS and HA are now available to the containers. VIC is running on top of ESXi and managed by virtual center. 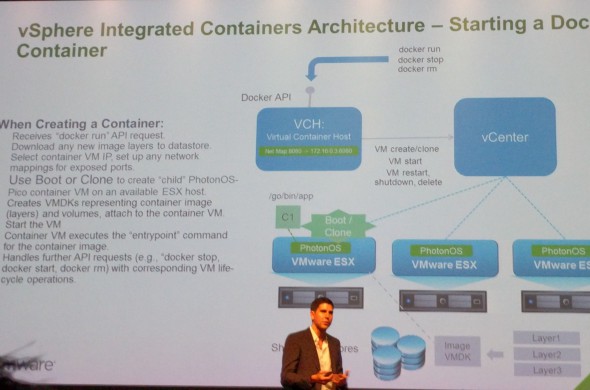 Photon platform Photon platform is an container optimized platform. Photon platform also runs on ESXi but is not managed by virtual center but by the Photon Controller. This platform is more lightweight that vCenter environment and doesn't provide functionality like HA, vMotion and DRS but it can use products like vSAN, NSX and other V Mware products. 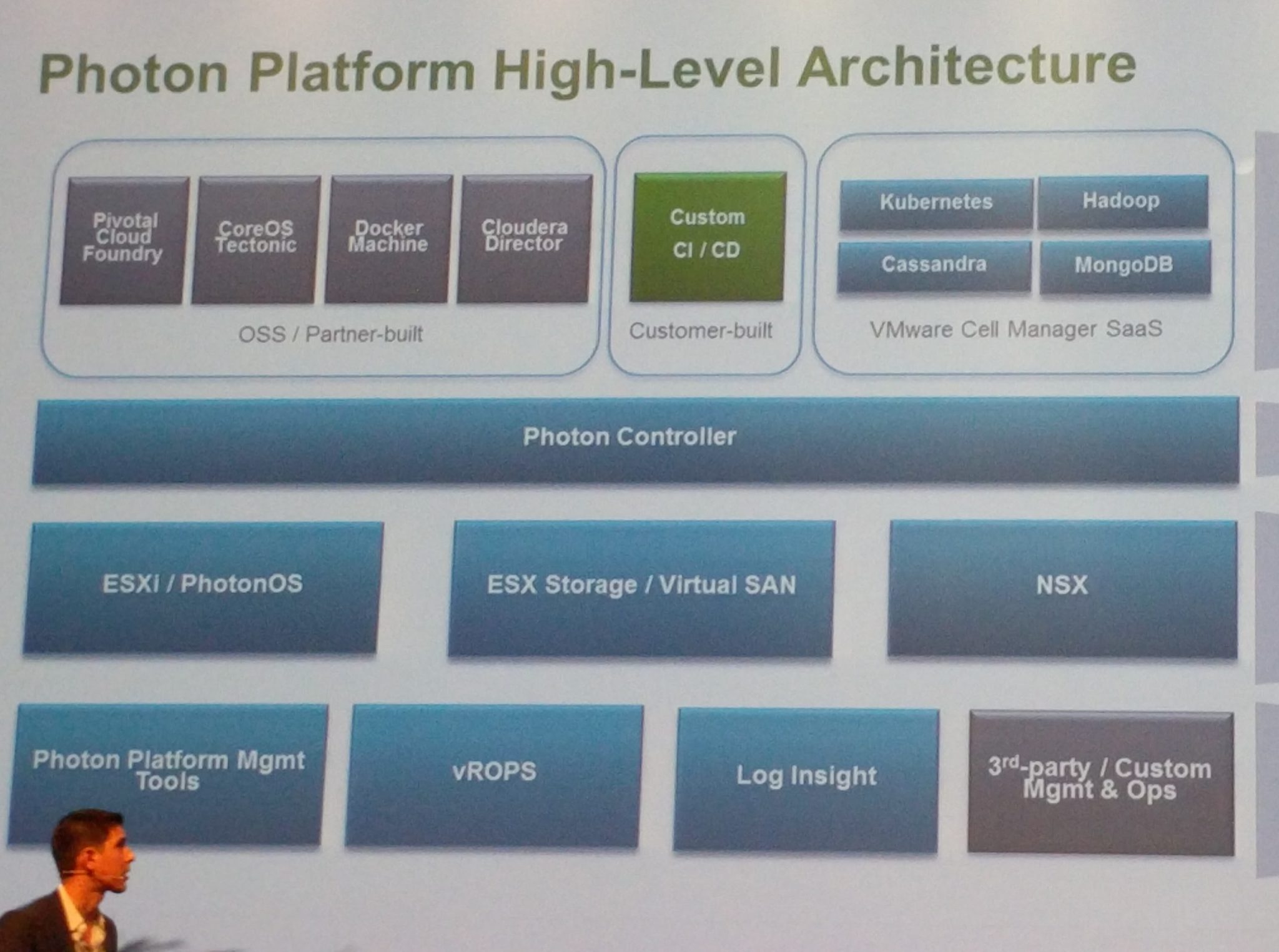 All these products are still in beta. Photon can be downloaded from Github as is it open source.   After the keynote session there were different breakout sessions. They sessions were presented by VMware, the sponsors of the event. Next to these sessions there were also sessions presented by the community. The sessions were around Software Defined Datacenter, Cloud Native Apps and cloud. The first session I chose was a follow up of the session of Kit and was presented by Jan-Willem Lammers, Lead Solutions Architect – VMware and Martijn Baecke, Pre-Sales Solutions Consultant – VMware . The title of the session was Cloud Native Apps, Microservices, Containers, vSphere Integrated Containers, Photon platform, baarden, regenbogen en eenhoorns. The second keynote was by Jay Marshall, Enterprise Cloud Accelation on Google Cloud Platform. This session was about how Google operates their cloud platform and how Googles copes with enormous amounts of data which it has to handle daily and also to manage and monitor in a real-time way. He also showed a short movie about how a Google datacenter looks. It was nice to see also a not VMware session during the UserCON. After this session I went to the Virtual SAN, the story up to 6.2! session and was presented by Duncan Epping, Chief Technologist, Storage & Availability – VMware. Duncan has been involved with the development of this product. This week version 6.2 was released. In this session Duncan explained what vSAN is and what VMware want to accomplish with this product. He also talked about the new features within vSAN 6.2. This was also my last session of the day. The time between the sessions I used to visit the sponsor, catch up with my network and talk with some colleagues and also with an old colleague. At the end of the day there was raffle but like always I was not one of the lucky guys. I think the organization did a great job with organizing this UserCON 2016 and a lot of interesting speakers. I enjoyed myself and can recommend to everybody who is interested in VMware, virtualization cloud etc. to visit the UserCON events.