Last year VMware and Amazon Web Services (AWS) announced a strategic partnership in October 2016, the week before VMworld Europe. During VMworld Europe I attended some of the sessions regarding this partnership and the offering. As it was just new there were not a lot of details available and it was mostly screens that they showed a not the product. In August of this year during VMworld in Las Vegas, the availability of VMware Cloud on AWS (VMC) was announced for the first AWS region, Oregon US. VMware will start deploying VMC also to other AWS regions. They will probably start with the west coast of the United States and after that Europe. In the end the service should be available in all the AWS regions. During VMworld 2017 there were a lot of sessions related to VMware Cloud on AWS. In this post I want to share information that I have received during VMworld Europe. VMC is running on AWS infrastructure but is managed by VMware. The basis of VMC is VMware Cloud Foundation. The core components are vSphere, vSAN and NSX. 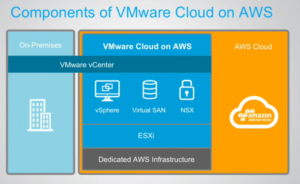 The more software-defined you are with VMware technologies on-premises, the more value you can derive out of VMware Cloud on AWS. For initial availability, you will need vSphere 6.5d or later if you plan to use vCenter Hybrid Linked Mode. However, you can still move workloads to and from VMware Cloud on AWS by doing cold migrations of the VMs. No conversion or modification is required. You can also just run VMware Cloud on AWS standalone with only a web browser.

The minimal configuration of VMware Cloud on AWS exists of 4 bare metal hosts. The maximum number of hosts is at the moment 16. All hosts will be running on dedicated hosts. So there is no nested virtualisation and the hosts are also not shared between customers. 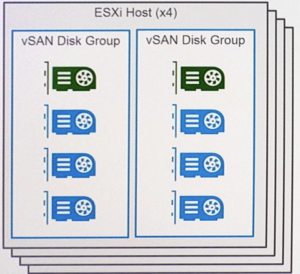 NSX enables all networking in VMC

As you can see in the picture below the environment is split in two resource pools. The first resource pool separates the management services which are managed by VMware from the customer vm’s. 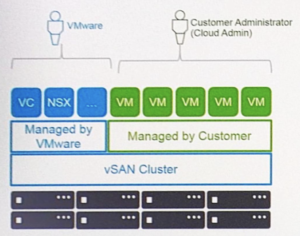 Conclusion: A very interesting service already at initial availability which a lot of new nice features in the future. Looking forward to the availability of VMC in Europe which should be there in Q1 or Q2 2018 and when there are more integrations possible from VMC to AWS services. If you want to try it for yourself VMware has released a hands-on lab.